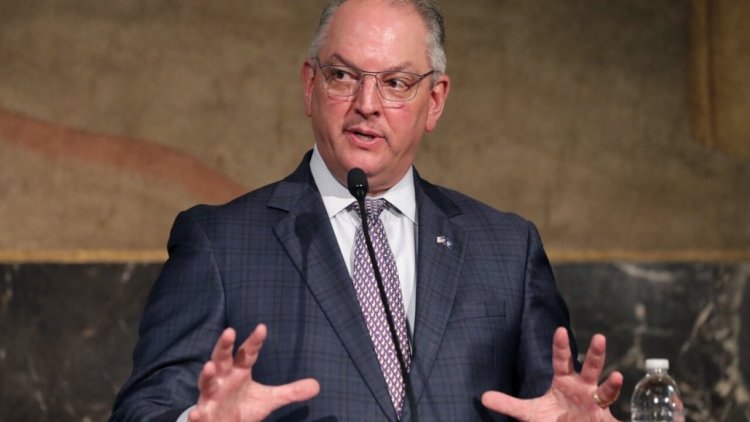 John Bel Edwards is an American politician and attorney serving as the 56th governor of Louisiana. A member of the Democratic Party, he previously served as the Democratic leader of the Louisiana House of Representatives for two terms.

Edwards was first elected to the Louisiana House in 2007. He defeated Republican U.S. Senator David Vitter in the second round of the 2015 election for governor. Edwards won a second term in 2019, becoming the first Democrat to win reelection as Governor of Louisiana since Edwin Edwards (no relation) in 1975. He is a United States Army veteran, having served with the 82nd Airborne Division, reaching the rank of captain. He is the only statewide elected Democratic official in Louisiana. Edwards is considered by many political observers to be a conservative Democrat.

He graduated from Amite High School in 1984 as valedictorian. In 1988, Edwards received a bachelors degree in engineering from the United States Military Academy, where he was on the Deans List and served as vice chairman of the panel that enforced the West Point honor code.

Edwards completed Airborne School in 1986, while he was a student at West Point. After receiving his commission, he completed the Infantry Officer Basic Course at Fort Benning (1988), Ranger School (1989), and the Infantry Officer Advanced Course (1992). Edwards served in the Army for eight years, mostly in the 25th Infantry Division and 82nd Airborne Division, including commanding a company in the 82nds 3rd Brigade, 505th Parachute Infantry Regiment. He ended his military career to return to Louisiana because of family considerations. Edwards earned a Juris Doctor from the Louisiana State University Paul M. Hebert Law Center in 1999.

Edwards is the brother of Independence, Louisiana chief of police Frank Millard Edwards, as well as Tangipahoa Parish Sheriff Daniel H. Edwards. Edwards is brother-in-law to 21st Judicial District Court Juvenile Judge Blair Downing Edwards, a Republican. In 2011, one of Edwards brothers, Christopher Edwards, died in a car crash after his vehicle veered into oncoming traffic and collided with a UPS truck.

John Bel Edwards Net Worth is $ 1 to 5 Million.

John Bel Edwards was born in East Baton Rouge Parish, Louisiana on September 16, 1966. He was raised in Amite, Louisiana, the son of Dora Jean and Tangipahoa Parish Sheriff Frank M. Edwards, Jr. Born into an economically and politically well-established family in the parish.

Edwards is married to Donna. She studied at the University of Southern Mississippi in Hattiesburg and graduated with a business degree in Industrial Management, before training as a teacher. They have two daughters, Sarah and Samantha Edwards, and one son, John Miller Edwards.

After graduating from law school, Edwards was a practicing attorney with the Edwards & Associates Law Firm in Amite. As an attorney, Edwards handled a variety of cases, though he did not practice criminal law because of his brothers status as the local sheriff.

In 2007, Edwards ran for a seat in the Louisiana House of Representatives and was forced into a general election run-off with fellow attorney George Tucker. Edwards was overwhelmingly elected, winning every parish in the district. Edwards was the only freshman lawmaker to chair a committee in the legislature. Edwards chaired the Veterans Affairs Committee in the House. Edwards was also selected as chairman of the Democratic house caucus, a rarity for a freshman legislator. Edwards became a critic of Governor Bobby Jindal for the governors frequent trips away from Louisiana to raise political funds for Republicans elsewhere while Louisiana had been reducing its funding for higher education.

On February 21, 2013, Edwards announced that he would run for governor in 2015. He said that his state needed "a healthy dose of common sense and compassion for ordinary people". The only major Democrat in the race, Edwards polled first in the nonpartisan blanket primary with 444,517 votes (39.9 percent), followed by Vitter, who finished second with 256,300 votes (23 percent). In third place was Louisiana Public Service Commissioner Scott Angelle of Breaux Bridge, who received 214,982 votes (19.3 percent).

On November 5, 2015, Jay Dardenne of Baton Rouge, the outgoing Republican lieutenant governor, who placed fourth in the gubernatorial primary election with 166,656 (15 percent), endorsed Democrat Edwards in the forthcoming race against Vitter. Dardenne made his announcement at "Free Speech Alley" in front of the LSU Student Union building in Baton Rouge.

Meanwhile, the Republican Governors Association entered the Louisiana campaign in support of Vitter with an advertisement highlighting Edwards past support for President Barack Obama, who twice lost Louisianas electoral votes. Edwards was a delegate for Obama at the 2012 Democratic National Convention. Edwards supported Hillary Clinton in the 2016 presidential election.

A statewide poll prior to the primary showed Edwards with a nine-point lead over Vitter. The JMC Analytics survey placed Edwards at 28 percent, instead of the actual 40 percent, and Vitter with 19 percent, rather than his actual 23 percent.[14] After the primary polls showed Edwards with a commanding lead. Market Research Insight pollster Verne Kennedy placed Edwards ahead, 54 to 38 percent or 51 to 40 percent, depending on the level of turnout among African-American voters, 25 or 20 percent.

On his inauguration day, Edwards failed to persuade the majority-Republican Louisiana House to choose a Democrat, Walt Leger III of New Orleans, as the Speaker. On the second ballot, after Republican Cameron Henry, an ally of Senator David Vitter, withdrew from consideration, a second Republican, Taylor Barras of New Iberia, was named Speaker. Since Huey Long, governors had traditionally handpicked the state house speakers. The Barras selection was considered a surprise because he had not even been mentioned as a candidate until the voting started.

On April 13, 2016, Edwards signed an executive order to protect lesbian, gay, bisexual, and transgender people from harassment or job dismissals. The order prohibits state agencies from discrimination based on either gender identity or sexual orientation. The order allows an exception for religious organizations who claim that compliance would violate their religious beliefs. "We respect our fellow citizens for their beliefs, but we do not discriminate based on our disagreements. I believe in giving every Louisianan the opportunity to be successful and to thrive in our state," Edwards said.

The governor also rescinded another executive order issued in 2015 by his predecessor, Bobby Jindal, which protected businesses and nonprofit organizations who oppose same-sex marriage from being legally punished for acting on those views. This order had prohibited state agencies from penalizing businesses and individuals who refuse or limit service from a "religious belief that marriage is or should be recognized as the union of one man and one woman."

In 2016, Edwards enacted Medicaid expansion. By the next year, the number of Louisiana individuals without health insurance was cut in half (11.4%, which was down from 22.7%). According to a study conducted by LSUs E.J. Ourso College of Business, Edwards expansion of Medicaid made over 500,000 more adults eligible for Medicaid, of whom 327,000 were uninsured.

Edwards promised early in 2017 that he could work with the incoming Donald Trump administration. He expressed eagerness to work with the Trump Cabinet, particularly on the issues of Medicaid expansion and federal infrastructure projects.

Edwards campaigned on a policy to reduce the prison population in Louisiana. One of his first actions as governor was to commute 22 sentences out of 56 that the states Board of Pardons had identified for him. Since the end of 2016 and to July 2018, Edwards did not sign a single commutation despite at least 70 cases that the states Board of Pardons identified for him during the period. In 2018, Edwards signed legislation that shortened the sentences for nonviolent, non-sex-crime offenders who showed good behavior while in prison.

In May 2018, Edwards signed a bill into law banning abortion after 15 weeks of pregnancy. In May 2019, he signed an even more restrictive "fetal heartbeat" bill although a similar bill in the 5th Circuit, one with a similar predecessor, was blocked by Judge Carlton Reeves, in the Southern District of Mississippi. In response to backlash from his more progressive supporters, Edwards released a statement in which he said, "As governor, I have been true to my word and my beliefs on this issue. But it is also my sincere belief that being pro-life means more than just being pro-birth." He continued his statement by referencing his attempts to expand investment in education, reform Louisianas criminal justice system, pass laws that would protect LGBT citizens from discrimination in the workplace, raise the minimum wage, and ensure equal pay between men and women.

At the end of 2018, Edwards said that his top priority for 2019 was to achieve a $1,000 pay raise for teachers and a $500 raise for school support workers. For the first time in 10 years, the House passed a budget that included pay raises for teachers and support staff.