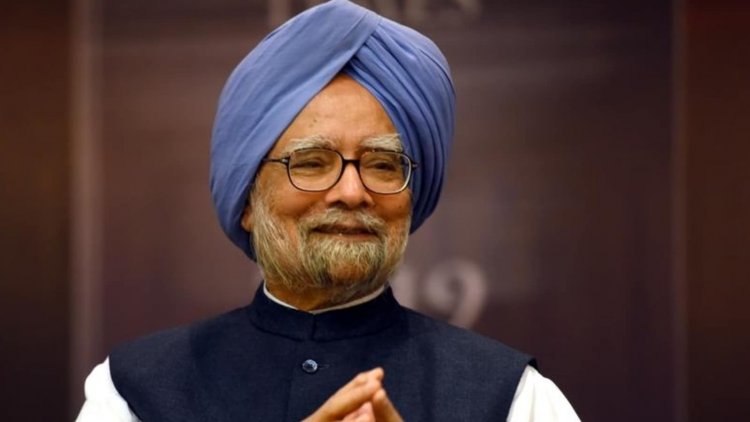 Born in Gah, West Punjab, in what is today Pakistan, Singhs family migrated to India during its partition in 1947. After obtaining his doctorate in economics from Oxford, Singh worked for the United Nations during 1966–1969. He subsequently began his bureaucratic career when Lalit Narayan Mishra hired him as an advisor in the Ministry of Commerce and Industry. During the 1970s and 1980s, Singh held several key posts in the Government of India, such as Chief Economic Advisor (1972–1976), governor of the Reserve Bank (1982–1985) and head of the Planning Commission (1985–1987).

In 1991, as India faced a severe economic crisis, newly elected Prime Minister P. V. Narasimha Rao surprisingly inducted the apolitical Singh into his cabinet as Finance Minister. Over the next few years, despite strong opposition, he as a Finance Minister carried out several structural reforms that liberalised Indias economy. Although these measures proved successful in averting the crisis, and enhanced Singhs reputation globally as a leading reform-minded economist, the incumbent Congress party fared poorly in the 1996 general election. Subsequently, Singh served as Leader of the Opposition in the Rajya Sabha (the upper house of the Parliament of India) during the Atal Bihari Vajpayee government of 1998–2004.

In 2004, when the Congress-led United Progressive Alliance (UPA) came to power, its chairperson Sonia Gandhi unexpectedly relinquished the premiership to Manmohan Singh. Singhs first ministry executed several key legislations and projects, including the Rural Health Mission, Unique Identification Authority, Rural Employment Guarantee scheme and Right to Information Act. In 2008, opposition to a historic civil nuclear agreement with the United States nearly caused Singhs government to fall after Left Front parties withdrew their support. Although Indias economy grew rapidly under UPA I, its security was threatened by several terrorist incidents (including the 2008 Mumbai attacks) and the continuing Maoist insurgency.

The 2009 general election saw the UPA return with an increased mandate, with Singh retaining the office of Prime Minister. Over the next few years, Singhs second ministry government faced a number of corruption charges—over the organisation of the 2010 Commonwealth Games, the 2G spectrum allocation case and the allocation of coal blocks. After his term ended in 2014 he opted out from the race for the office of the Prime Minister of India during the 2014 Indian general election. Singh was never a member of the Lok Sabha but served as a member of the Parliament of India, representing the state of Assam in the Rajya Sabha for five terms from 1991 to 2019. In August 2019, Singh filed his nomination as a Congress candidate to the Rajya Sabha from Rajasthan after the death of sitting MP Madan Lal Saini.

After completing his D.Phil., Singh returned to India. He was a senior lecturer of economics at Panjab University from 1957 to 1959. During 1959 and 1963, he served as a reader in economics at Panjab University, and from 1963 to 1965, he was an economics professor there. Then he went to work for the United Nations Conference on Trade and Development (UNCTAD) from 1966–1969. Later, he was appointed as an advisor to the Ministry of Foreign Trade by Lalit Narayan Mishra, in recognition of Singhs talent as an economist.

From 1969 to 1971, Singh was a professor of international trade at the Delhi School of Economics, University of Delhi.

Singh returned to India from Geneva in November 1990 and held the post as the advisor to Prime Minister of India on economic affairs during the tenure of V. P. Singh. In March 1991, he became chairman of the University Grants Commission.

Singh was born to Gurmukh Singh and Amrit Kaur on 26 September 1932, in Gah, Punjab, British India, into a Sikh family. He lost his mother when he was very young and was raised by his paternal grandmother, to whom he was very close.

Singh married Gursharan Kaur in 1958. They have three daughters, Upinder Singh, Daman Singh and Amrit Singh. Upinder Singh is a professor of history at Ashoka University. She has written six books, including Ancient Delhi (1999) and A History of Ancient and Early Medieval India (2008). Daman Singh is a graduate of St. Stephens College, Delhi and Institute of Rural Management, Anand, Gujarat, and author of The Last Frontier: People and Forests in Mizoram and a novel Nine by Nine, Amrit Singh is a staff attorney at the American Civil Liberties Union. Ashok Pattnaik, 1983 batch Indian Police Service officer, son-in-law of former Prime Minister Manmohan Singh, was appointed CEO of National Intelligence Grid in 2016.

In June 1991, Indias prime minister at the time, P. V. Narasimha Rao, chose Singh to be his finance minister. Singh told Mark Tully the British journalist in 2005 "On the day (Rao) was formulating his cabinet, he sent his Principal Secretary to me saying, The PM would like you to become the Minister of Finance. I didnt take it seriously. He eventually tracked me down the next morning, rather angry, and demanded that I get dressed up and come to Rashtrapati Bhavan for the swearing in. So thats how I started in politics".

In 1991, Indias fiscal deficit was close to 8.5 per cent of the gross domestic product, the balance of payments deficit was huge and the current account deficit was close to 3.5 percent of Indias GDP. Indias foreign reserves barely amounted to US$1 billion, enough to pay for 2 weeks of imports in comparison to US$283 billion today.

Evidently, India was facing an economic crisis. At this point, the government of India sought funds from the supranational International Monetary Fund, which, while assisting India financially, imposed several conditions regarding Indias economic policy. In effect, IMF-dictated policy meant that the ubiquitous Licence Raj had to be dismantled, and Indias attempt at a state-controlled economy had to end.

Subsequently, Singh, who had thus far been one of the most influential architects of Indias socialist economy, eliminated the permit raj, reduced state control of the economy, and reduced import taxes.

Rao and Singh thus implemented policies to open up the economy and change Indias socialist economy to a more capitalistic one, in the process dismantling the Licence Raj, a system that inhibited the prosperity of private businesses. They removed many obstacles standing in the way of Foreign Direct Investment (FDI), and initiated the process of the privatisation of public sector companies. However, in spite of these reforms, Raos government was voted out in 1996 due to non-performance of government in other areas. In praise of Singhs work that pushed India towards a market economy, long-time Cabinet minister P. Chidambaram has compared Singhs role in Indias reforms to Deng Xiaopings in China.

In 1993, Singh offered his resignation from the post of Finance Minister after a parliamentary investigation report criticised his ministry for not being able to anticipate a US$1.8 billion securities scandal. Prime Minister Rao refused Singhs resignation, instead promising to punish the individuals directly accused in the report.

Leader of Opposition in Rajya Sabha

Singh was first elected to the upper house of Parliament, the Rajya Sabha, in 1991 by the legislature of the state of Assam, and was re-elected in 1995, 2001, 2007 and 2013. From 1998 to 2004, while the Bharatiya Janata Party was in power, Singh was the Leader of the Opposition in the Rajya Sabha. In 1999, he contested for the Lok Sabha from South Delhi but was unable to win the seat.

After the 2004 general elections, the Indian National Congress ended the incumbent National Democratic Alliance (NDA) tenure by becoming the political party with the single largest number of seats in the Lok Sabha. It formed United Progressive Alliance (UPA) with allies and staked claim to form government. In a surprise move, Chairperson Sonia Gandhi declared Manmohan Singh, a technocrat, as the UPA candidate for the Prime Ministership. Despite the fact that Singh had never won a Lok Sabha seat, according to the BBC, he "enjoyed massive popular support, not least because he was seen by many as a clean politician untouched by the taint of corruption that has run through many Indian administrations." He took the oath as the Prime Minister of India on 22 May 2004.

India held general elections to the 15th Lok Sabha in five phases between 16 April 2009 and 13 May 2009. The results of the election were announced on 16 May 2009. Strong showing in Andhra Pradesh, Rajasthan, Maharashtra, Tamil Nadu, Kerala, West Bengal and Uttar Pradesh helped the United Progressive Alliance (UPA) form the new government under the incumbent Singh, who became the first prime minister since Jawaharlal Nehru in 1962 to win re-election after completing a full five-year term. The Congress and its allies were able to put together a comfortable majority with support from 322 members out of 543 members of the House. These included those of the UPA and the external support from the Bahujan Samaj Party (BSP), Samajwadi Party (SP), Janata Dal (Secular) (JD(S)), Rashtriya Janata Dal (RJD) and other minor parties.

On 22 May 2009, Manmohan Singh was sworn in as the Prime Minister during a ceremony held at Rashtrapati Bhavan. The 2009 Indian general election was the largest democratic election in the world held to date, with an eligible electorate of 714 million.

The 2012 report filed by the CAG in Parliament of India states that due to the allocation of coal blocks to certain private companies without bidding process the nation suffered an estimated loss of Rs 1.85 trillion (short scale) between 2005 and 2009 in which Manmohan Singh was the coal minister of India.

Manmohan Singh declined to appear before a Joint Parliamentary Committee (JPC) in April 2013 when called upon by one of the members of JPC Yashwant Sinha for his alleged involvement in the 2G case.

Singhs premiership officially ended at noon on May 17, 2014. He did not contest the 2014 general election for the 16th Lok Sabha. Singh resigned his post as prime minister, after the Bharatiya Janata Party led National Democratic Alliance won the 2014 Lok Sabha election. Though he served as the acting prime minister till 25 May 2014, when Narendra Modi was sworn in as the new prime minister. Singh along with Congress president Sonia Gandhi, former Presidents A. P. J. Abdul Kalam and Pratibha Patil, Vice President Hamid Ansari attended Narendra Modis swearing-in ceremony. After the swearing-in ceremony Singh shifted to 3 Motilal Nehru Road bungalow, New Delhi. In 2016 it was announced that Singh was to take up a position at Panjab University as the Jawaharlal Nehru Chair.