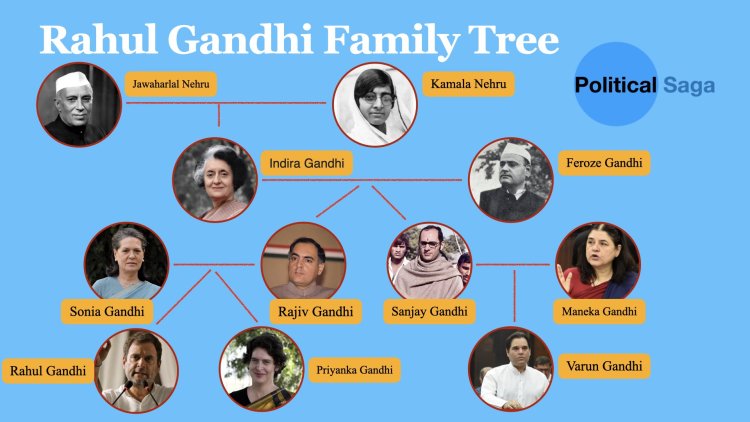 Rahul Gandhi is an Indian politician.Rahul Gandhi Belongs to Political Family Background. He is the Son of Rajiv Gandhi who was the prime minister of India, and Sonia Gandhi who later became the president of Indian National Congress.Rahul Gandhi paternal grandfather Feroze Gandhi was a Parsi who was From Gujarat.His great-grandfather was of India's first prime minister, Jawaharlal Nehru.His Complete Family Belongs to Political Bachground.Priyanka Vadra is his younger sister and Robert Vadra is his brother-in-law.

His Mother's name is Sonia Gandhi Who is an Indian politician. She is the longest serving president of the Indian National Congress, a social democratic political party, which has governed India for most of its post-independence history.

His Father's Name was Rajiv Gandhi who was an Indian politician who served as the sixth prime minister of India from 1984 to 1989.

He has a Sister name Priyanka Gandhi Vadra is an Indian politician and the general secretary of the All India Congress Committee in charge of Uttar Pradesh.

He is the great-grandson of Jawaharlal Nehru, the first Prime Minister of India. His grandmother was former prime minister Indira Gandhi.

His paternal uncle Late Sanjay Gandhi was also a politician. His aunt, Maneka Gandhi, and cousin, Varun Gandhi are leading politicians in the Bhartiya Janta Party.

Rahul Gandhi is an Indian politician and member of the 17th Lok Sabha, where he represents the seat of Wayanad, Kerala. As a member of the Indian National Congress, he served as the organization's president from 16 December 2017 until 3 July 2019. Gandhi is the president of the Indian Youth Congress, the National Students Union of India, and the Rajiv Gandhi Foundation and Rajiv Gandhi Charitable Trust.

Gandhi started his undergraduate education at St. Stephen's College before transferring to Harvard. Following the killing of his father, the late Prime Minister Rajiv Gandhi, Gandhi relocated to Rollins College in Florida due to security threats. His graduation year was 1994.

Gandhi received their M.Phil. from Cambridge the following year. After graduating, he began his work with the Monitor Group, a London-based management consulting organization. Soon after returning to India, he founded the technology outsourcing company Backops Services Private Ltd. in Mumbai.

In 2004, Gandhi declared his intention to enter active politics and successfully contested the general elections conducted that year in Amethi, a seat previously held by his father; he reclaimed the seat in 2009 and 2014, respectively.

Gandhi was chosen Vice-President of the Congress in 2013, having previously served as General Secretary, in response to appeals from Congress party veterans for his greater participation in party politics and national leadership. Gandhi led the campaign for the Congress in the 2014 Indian general elections; the party won only 44 seats, compared to 206 seats in the 2009 general election.

Gandhi succeeded his mother as leader of the Congress in 2017 and led the party into the 2019 Indian general election. The Indian National Congress gained 52 seats, falling short of the 10% threshold required for opposition leader. After this terrible election performance, Gandhi resigned as party leader, and his mother Sonia Gandhi took over.