Ben Sasse is us senator from Nebraska since 2015 know all about him in this article as like his Family, Net Worth, Parents, Wife, Children , Education and Career Earnings 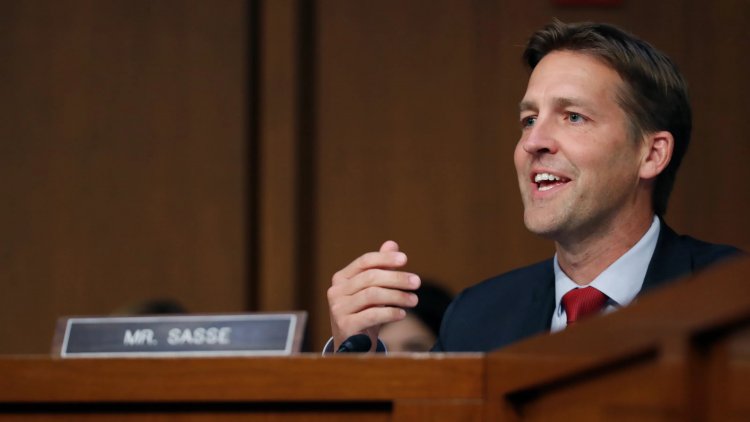 Benjamin Eric Sasse is an American politician serving as the junior United States senator for Nebraska since 2015. He is a member of the Republican Party.

Born in Plainview, Nebraska, Sasse holds a bachelors degree in government from Harvard University, a Master of Arts in liberal studies from St. Johns College and masters and doctoral degrees in American history from Yale University. He taught at the University of Texas and served as an assistant secretary in the U.S. Department of Health and Human Services.

In 2010, Sasse was named the 15th president of Midland University in Fremont, Nebraska. In 2014, he ran for a vacant seat in the U.S. Senate, defeating Democratic nominee David Domina, 65% to 31%. In 2020, Sasse was reelected to a second term. On February 13, 2021, Sasse was one of seven Republican senators to vote to convict Donald Trump of incitement of insurrection in his second impeachment trial.

Sasse was born on February 22, 1972, in Plainview, Nebraska, the son of Gary Lynn Sasse, a high school teacher and football coach, and Linda Sasse. He graduated from Fremont Senior High School in 1990 and was valedictorian of his class.

Sasse graduated from Harvard University in 1994 with a bachelors degree in government. He also studied at the University of Oxford during the fall of 1992 on a junior year abroad program. In 1998, Sasse earned a Master of Arts in liberal studies from the Graduate Institute at St. Johns College. He also earned a Master of Arts, Master of Philosophy, and Doctor of Philosophy in history from Yale University. In 2000, The Mustard Seed Foundation selected Sasse as a Harvey Fellow. Sasses doctoral dissertation, "The Anti-Madalyn Majority: Secular Left, Religious Right, and the Rise of Reagans America", won the Theron Rockwell Field and George Washington Egleston Prizes.

Sasse and his wife, Melissa Sasse, live in Fremont, Nebraska, with their three children. Their children are homeschooled.

Sasse was raised a Lutheran and baptized in the Lutheran Church–Missouri Synod. As an undergraduate in the early 1990s, he encountered the teachings of W. Robert Godfrey at the Bolton Conference. Sasse identifies this as the time when he and his wife first began to embrace the "reformed faith". He later became an elder in the United Reformed Churches in North America and served on the board of trustees for Westminster Seminary California. He is a member of Grace Church, a Presbyterian Church in America (PCA) congregation in Fremont.

Sasse was born on February 22, 1972, in Plainview, Nebraska, the son of Gary Lynn Sasse, a high school teacher and football coach, and Linda Sasse.

Sasse and his wife, Melissa Sasse, live in Fremont, Nebraska, with their three children.

Sasse and his wife, Melissa Sasse, live in Fremont, Nebraska, with their three children.

From September 1994 to November 1995, Sasse worked as an associate consultant at the management consulting firm Boston Consulting Group. For the next year, he served as consultant/executive director for Christians United For Reformation (CURE). During his tenure, CURE merged with the Alliance of Confessing Evangelicals (ACE), and Sasse became executive director of ACE in Anaheim, California.

From January 2004 to January 2005, Sasse served as chief of staff for the U.S. Department of Justice Office of Legal Policy in Washington, D.C. and as a part-time assistant professor at the University of Texas at Austin, commuting to Austin to teach. Sasse left the Department of Justice to serve as chief of staff to Representative Jeff Fortenberry from January to July 2005.

Sasse then advised the U.S. Department of Homeland Security in Washington, D.C., on national security issues from July to September 2005 as a consultant. He moved to Austin, Texas, to resume his professorship full-time from September 2005 to December 2006.

From December 2006 to December 2007, Sasse served as counselor to the secretary at the U.S. Department of Health and Human Services (HHS) in Washington, D.C., advising the secretary on a broad spectrum of health policy issues, from healthcare access to food safety and security.

In July 2007, President George W. Bush nominated Sasse to the post of assistant secretary for planning and evaluation in the U.S. Department of Health and Human Services. The Senate confirmed him in December 2007 and he served until the end of the Bush administration, in January 2009. While at HHS, Sasse took an unpaid leave from the University of Texas.

During 2009, Sasse advised private equity clients and health care investors and taught at the University of Texas. In October 2009, he officially joined the University of Texas LBJ School of Public Affairs Center for Politics and Governance as a fellow, before being appointed president of Midland University. While at Texas, he was critical of Obama-era proposals to expand public health care programs. He criticized public-option proposals as a step toward single-payer health insurance and health-care rationing. He supported a plan to lower the cost of Medicare by raising the eligibility age and cutting benefits. He also coauthored a paper proposing limits to Medicaid reimbursements for hospital care for the uninsured.

Sasse was announced as the 15th president of Midland Lutheran College (now Midland University) in October 2009. At 37, he was one of the youngest chief executives in American higher education when he took over leadership of the 128-year-old institution in spring 2010. Sasses grandfather, Elmer Sasse, worked for Midland for 33 years, mainly as vice president of finance. The school was experiencing financial and academic difficulties; Sasse has been credited with "turning it around", rebranding "Midland Lutheran College" as Midland University, instituting new policies (including spot quizzes and class attendance), and "prodigious fundraising".

Sasse was installed as president on December 10, 2010. When he was appointed, enrollment was at a historic low and the college was "on the verge of bankruptcy". During his tenure as president, enrollment grew from 590 to 1,300 students. When nearby Dana College was forced to close, Sasse hired much of its faculty and enabled most of its students to transfer to Midland.

When Sasse announced his intention to run for U.S. Senate, he offered to resign his post at Midland. Instead, the board asked him to stay under a partial leave of absence; in October 2013, his employment contract was amended to reduce his pay. Sasse stepped down as president of Midland on December 31, 2014.

In October 2013, Sasse announced his candidacy for the Senate seat held by Republican Mike Johanns, who was not seeking reelection. As of October 2013, his fundraising total of nearly $815,000 from individual donors in his first quarter broke Nebraskas previous record of $526,000 from individual donors, set in 2007 by Johanns while he was U.S. Secretary of Agriculture.

Upon announcing his candidacy, Sasse expressed strong opposition to the Affordable Care Act. His primary opponent, Shane Osborn, questioned the depth of Sasses opposition to the ACA, publicizing articles and speeches Sasse delivered during and after the acts passage through Congress; according to the Omaha World-Herald, "Osborns campaign appears intent on questioning whether Sasse is a true conservative." The Osborn campaign cited, among other pieces, a 2009 Bloomberg Businessweek column titled "Health-Care Reform: The Rush to Pass a Bad Bill", stating that "Theres an emerging consensus that this might be a good idea", and a 2010 speech in which Sasse said Republicans would probably lack the votes to repeal the ACA, stating that "a middle-class entitlement has never been repealed", and opining that Republicans had failed to offer a viable alternative, preferring to stage "symbolic repeal votes". Sasses response was that in his articles and speeches, he was describing the political landscape rather than giving his own opinions on the ACAs merits; to a World-Herald reporter, he said, "I have never changed my position on thinking Obamacare is a bad idea".

On November 4, 2014, Sasse won the general election, defeating Democratic nominee David Domina with 64.4% of the vote to Dominas 31.5%.

In 2020, Sasse defeated Democrats Chris Janicek, who won the Democratic primary, and Preston Love Jr., who had the support of the state Democratic party. Sasse received 62.7% of the vote.

Sasse took office on January 3, 2015. He was officially sworn in when the 114th Congress convened on January 6.

In February 2019, Sasse was one of 16 senators to vote against legislation preventing a partial government shutdown and containing $1.375 billion for barriers along the U.S.–Mexico border that included 55 miles of fencing.

In March 2019, Sasse was one of 12 senators to cosponsor a resolution that would impose a constitutional amendment limiting the Supreme Court to nine justices. The resolution was introduced after multiple Democratic presidential candidates expressed openness to increasing the number of seats on the Supreme Court.

Sasse was participating in the January 6, 2021, certification of the 2021 United States Electoral College vote count when Donald Trump supporters stormed the U.S. Capitol. In response, he blamed Trump. He said that Trump "delighted" in the attack on the Capitol and was a broken man. Sasse said that he would consider articles of impeachment if presented with them in the Senate, citing that Trump had "disregarded his oath of office."

Sasse joined six other Republican Senators in voting to convict Trump on February 13, 2021.