Jacob Frey is us mayor of Minneapolis since 2018 know all about him in this article as like his Family, Net Worth, Parents, Wife, Children, Education and Career Earnings 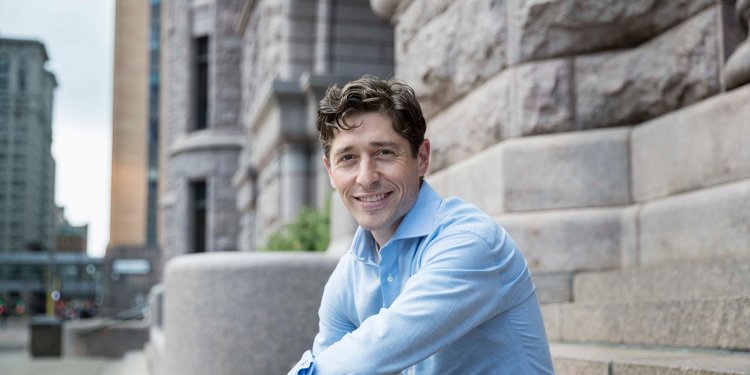 Jacob Lawrence Frey is an American politician and attorney who has served as the mayor of Minneapolis, Minnesota since 2018. A member of the Minnesota Democratic–Farmer–Labor Party, he served on the Minneapolis City Council from 2014 until 2018. He was first elected in 2017 and reelected in 2021.

Frey grew up in Oakton, Virginia, a suburb of Washington, D.C. His parents were both professional modern ballet dancers. his mother is of Russian Jewish ancestry, and his father converted to Judaism.

Jacob Frey married his first wife, Michelle Lilienthal, in 2009. They divorced in early 2014. Frey met his second wife, Sarah Clarke, through community organizing in Minneapolis. The couple married in July 2016. Clarke is a lobbyist for Hylden Advocacy & Law, where she represents several business, nonprofits, and community organizations at the Minnesota legislature and executive branch agencies. In March 2020, the couple announced they were expecting their first child in September. Their daughter Frida Jade Frey was born at 5:22 pm on September 16, 2020, weighing 7 pounds and 10 ounces.

Frey moved to Minneapolis in 2009 after graduating from law school and joined the law firm Faegre & Benson (now Faegre Baker Daniels) to practice employment and civil rights law before moving on to the law firm Halunen & Associates.

Frey has been active in community causes since moving to Minneapolis. After a tornado struck North Minneapolis in 2011, Frey provided legal services to tenants who lost their homes. In late 2011, Frey ran in a special election for an open state senate seat and came in fifth in the party primary. The only candidate he finished ahead of had dropped out of the race before election day.

In 2012, after coming in last in a primary for a state senate seat, Frey founded and organized the first Big Gay Race, a 5K charity race to raise money for Minnesotans United for All Families, a political group organizing for marriage equality.

Frey ran in the 2013 Minneapolis City Council election to represent Ward 3. He received the Democratic–Farmer–Labor endorsement, as well as endorsements from more than 40 elected officials and organizations. Frey's platform promised better constituent services, to spur residential development, increase the number and variety of small and local businesses, and push for full funding of affordable housing and address climate change. He defeated incumbent Diane Hofstede with more than 60% of the vote and took office on January 2, 2014.

As a City Council member, Frey focused on affordable housing, environmental policy, workplace regulations, and voting access. He authored an amendment to the 2015 budget that increased funding for the city's Affordable Housing Trust Fund.

In 2016, Frey authored an ordinance requiring polluters to pay fees based on the amount of pollution they produce. The fees are used to support green business improvements. Since the program's launch, emissions linked to climate change have declined substantially. Frey and the City of Minneapolis were honored at the 2018 U.S. Conference of Mayors for the program's success.

As chair of the council's Elections Committee, Frey led the effort to pass an ordinance requiring landlords to provide tenants with voter registration information. The ordinance has served as a national model, with cities like Seattle and St. Paul following suit. A federal district court judge later struck down the ordinance as unconstitutional. Frey also led the effort to expand early voting access in Minneapolis ahead of the 2016 election, increasing the number of early voting sites in Minneapolis from one to five.

Frey announced his candidacy for mayor of Minneapolis on January 3, 2017 and won the November 7 election. He was sworn into office on January 2, 2018.

Frey is Minneapolis's second Jewish mayor, and its second-youngest after Al Hofstede, who was 34 when he was elected mayor in 1973. Frey campaigned on a platform of increasing support for affordable housing and improving police-community relations.

Frey rolled out reforms to the Minneapolis Police Department's body camera policy in April 2018. The changes tied non-compliance to stricter disciplinary consequences for the first time. Following the changes, officer compliance with the body camera policy reached record highs. In 2019, Frey announced during his State of the City address the banning of "warrior" training for police officers, which had been taken by the officer who killed Philando Castile. But Frey has faced protests from community groups for increases to the police department budget and the lack of significant investment in community-led safety alternatives. Axios describes his stance on policing as moderate.

As mayor, Frey is pushing for a plan that would allow the building of four-plexes in every part of the city. Two-thirds of Minneapolis is zoned exclusively for single-family homes.

In 2018, the Minneapolis City Council voted for Minneapolis 2040, a comprehensive rezoning reform plan. According to Slate, the plan would "permit three-family homes in the city’s residential neighborhoods, abolish parking minimums for all new construction, and allow high-density buildings along transit corridors." Slate wrote that by implementing the plan, "Minneapolis will become the first major U.S. city to end single-family home zoning, a policy that has done as much as any to entrench segregation, high housing costs, and sprawl as the American urban paradigm over the past century."

Frey was reelected with 56.2% of the vote in 2021, defeating challenger Kate Knuth in the final round of ranked-choice voting.