Mike DeWine is us governor of Ohio since 2019 know all about Mike DeWine Net Worth, Family, wife, Education, Children, Age, Biography, Political Career. 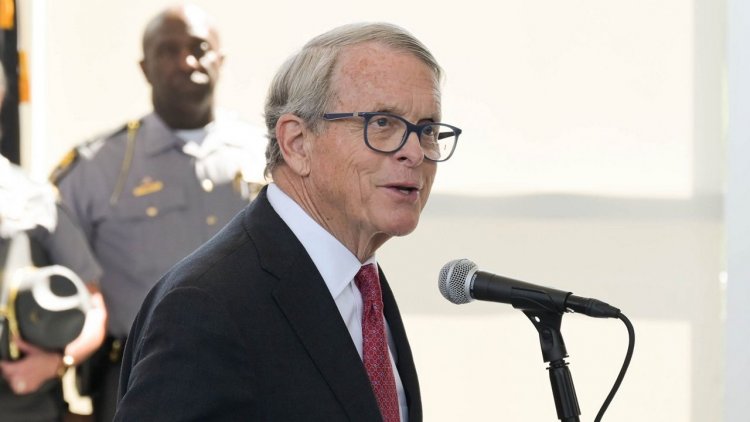 Richard Michael DeWine is an American politician and attorney serving as the 70th governor of Ohio since 2019. A member of the Republican Party, DeWine previously served as Ohio Attorney General from 2011 to 2019, United States Senator from 1995 to 2007, Lieutenant Governor of Ohio under George Voinovich from 1991 until 1994, and U.S. Representative from 1983 until 1991.

DeWine was born and grew up in Yellow Springs, Ohio. He is the son of Jean Ruth (Liddle) and Richard Lee DeWine. He lives in Cedarville, Ohio residing at the Whitelaw Reid House. Of Irish descent, he was raised and identifies as a Roman Catholic.

He and his wife Frances have been married since June 3, 1967, and have had eight children, one of whom died in an automobile accident in 1993.

At age 25, DeWine started working as an Assistant Prosecuting Attorney for Greene County, Ohio, and in 1976 was elected County Prosecutor, serving for four years. In 1980 he was elected to the Ohio State Senate and served one two-year term.

Two years later, U.S. Representative Bud Brown of Ohios 7th congressional district retired after 18 years in Congress; his father, Clarence Brown, Sr., had held the seat for 26 years before that. DeWine won the Republican nomination, assuring him of election in November. He was re-elected three more times from this district, which stretches from his home in Springfield to the Columbus suburbs. He ran unopposed in 1986 during what is regarded as a bad year for Republicans nationally. DeWine gave up his seat in 1990 to run for Lieutenant Governor of Ohio as the running mate of George Voinovich. The Voinovich-DeWine ticket was easily elected.

In 1992, DeWine unsuccessfully ran for United States Senate against the former astronaut and incumbent Senator John Glenn. His campaign used the phrase, "What on earth has John Glenn done?" echoing Jeff Bingamans slogan, What on Earth has he done for you lately?" against former astronaut Harrison Schmitt in their 1982 Senate race.

In 1994 DeWine ran again for Senate, defeating prominent attorney Joel Hyatt (the son-in-law of retiring Senator Howard Metzenbaum) by a 14-point margin. DeWine was re-elected in 2000, defeating gunshow promoter Ronald Dickson (161,185 votes, or 12.44%) and former U.S. Rep. Frank Cremeans (104,219 votes, or 8.05%) in the primary and Ted Celeste (brother of former Ohio Gov. Dick Celeste) in the general election. DeWine was defeated in the 2006 midterm election by Democrat Sherrod Brown, receiving 905,644 fewer votes in 2006 than he received in 2000. DeWine had seats on the Senate Judiciary and Select Intelligence committees. DeWine was the initial sponsor of the Drug-Free Century Act in 1999.

On July 21, 2009, DeWine announced his intention to run for Attorney General of the State of Ohio. On November 2, 2010, DeWine was elected attorney general, defeating incumbent Richard Cordray (D), 48–46%. As attorney general of Ohio, DeWine sent letters to drugstore chains encouraging them to discontinue the sale of tobacco products.

In the 2012 Republican presidential primary, DeWine endorsed Tim Pawlenty, then endorsed Mitt Romney after Pawlenty dropped out of the race. On February 17, 2012, DeWine announced he was retracting his endorsement of Mitt Romney and endorsed Rick Santorum (Coincidentally, both DeWine and Santorum were elected Senators in 1994, re-elected in 2000, and lost re-election in 2006). DeWine said, "To be elected president, you have to do more than tear down your opponents. You have to give the American people a reason to vote for you, a reason to hope, a reason to believe that under your leadership, America will be better. Rick Santorum has done that. Sadly, Governor Romney has not."

On November 4, 2014, DeWine was re-elected as attorney general by defeating challenger David A. Pepper. DeWine carried 83 out of Ohios 88 counties.

On May 26, 2016, DeWine announced that he would run for Governor of Ohio in 2018. He reconfirmed this on June 25, 2017, at the annual ice cream social held at his home in Cedarville, Ohio. On December 1, 2017, DeWine officially chose Ohio Secretary of State Jon Husted as his running mate. On May 8, 2018, DeWine successfully won the Republican primary, defeating incumbent Lieutenant Governor Mary Taylor, with 59.8% of the vote. He faced Democratic nominee and former Consumer Financial Protection Bureau Director Richard Cordray in the general election, their second election against each other, defeating him by a margin of about four percentage points.

On February 22, 2019, President Trump appointed Governor DeWine to the bipartisan Council of Governors.

On August 4, 2019, a mass shooting occurred in Dayton, Ohio, which killed ten people and injured twenty-seven others; this followed a separate mass shooting in El Paso, Texas by just thirteen hours. At a vigil for the victims of the Dayton shooting the next day, DeWine was drowned out by a crowd chanting Do something!; the chant referred to the lack of legislative gun control actions on the state and federal level. On August 6, DeWine proposed to allow judges to confiscate firearms from those deemed potentially dangerous and to provide those individuals with mental health treatment while maintaining their due process rights. Other notable aspects of DeWines plan include: expanded background checks before purchasing a firearm, increased access to psychiatric and behavioral health services, and increased penalties for illegally possessing firearms.

In October 2019, he held the first meeting of a Lead Advisory Committee he appointed for the state. The committee is meant to advise Dewine on the states lead remediation efforts. In December 2019, he expressed his support for Ohio allowing cities to ban plastic bags, opposing two bills in the state legislature that would have forbidden it being pushed by fellow Republicans.

On December 10, 2019, during the Ohio Contractors Associations winter conference in Columbus, DeWine said that he wanted to improve the Interstate rest areas in Ohio by adding more information about Ohios history and culture, he also said that "Im told that our rest areas are sorry." In late December, DeWine announced that Ohio would continue to accept refugees. In a letter to Secretary of State Mike Pompeo, DeWine mentioned that "Before entering the United States, there is a lengthy, complex, and careful vetting process done by multiple federal agencies to confirm a refugees eligibility for entrance."

In January 2020, DeWine sent troops from the Ohio National Guard to Puerto Rico, which had recently experienced several earthquakes. On January 15, DeWine signed a $30 million funding bill for Ohio farmers to prevent algal blooms, which went into effect on February 1. On January 27, DeWine signed Senate Bill 7, which gives military members and their spouses better employment opportunities by simplifying the process to transfer their occupational licenses to Ohio. In February 2020, he announced new distracted driving legislation he was sponsoring. Also in February 2020, he attracted some note for declining to share his opinion about Ohios death penalty, at the time having "frozen all Ohio executions indefinitely as the state struggles to find lethal-injection drugs".

Informed of the public risk by Ohio Department of Health Director Dr. Amy Acton, MD; on March 3, DeWine cancelled most of the Arnold Sports Festival due to the imminent threat of the COVID-19 pandemic in Ohio, prior to any cases or deaths being reported. The cancellation was widely regarded as "radical" at the time but was soon seen as less so, with Axios calling him "among the leading governors in the country sounding the alarm about the threat of the coronavirus" and The Washington Post calling his and Actons response "a national guide to the crisis" and "textbook recommendations", pointing out numerous occasions when moves taken by Ohio were soon followed by other states. The Hill said hed "been one of the most aggressive governors in responding to the pandemic". He has supported funding for COVID-19, signing his support of a funding bill along with 37 other governors in March 2020. On March 11, 2020, DeWine issued an order limiting visitors to Ohio assisted living facilities and nursing homes, limiting visitors to one per day per resident, with all visitors to be screened for illness. Also on March 11, 2020, he announced he was drafting legislation to limit mass gatherings in the state. Gov. DeWine barred spectators from sporting events; was first in the US to shut down schools throughout his state; and, on the night before it was to take place, postponed Ohios primary election. He directed the Ohio Department of Health to order the closing of the states more than 22,000 food service locations and bars, except for carry-out. This was one of the earliest state closures of restaurants in response to the COVID-19 pandemic, and drew disapproval from many high-level state Republicans. On April 1, DeWine was noted by the BBC as "quick to defer to Dr Acton for specific questions on the virus and its spread", during daily news briefings, "reminding Ohioans that the states decisions are driven by science".