Robert Garcia is us mayor of Long Beach, California since 2014 know all about him in this article as like his Family, Net Worth, Parents, Husband, Partner, Children, Education and Career Earnings 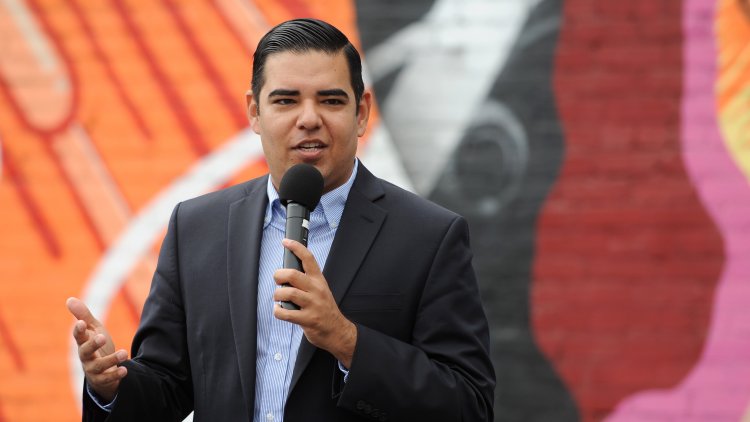 Robert Garcia is a Peruvian-American politician who is the 28th and current mayor of Long Beach, California. A member of the Democratic Party, he was first elected in the 2014 election and won reelection in 2018. He is both the city's youngest and first elected openly LGBT mayor, and also the first Latino American to hold the office. He is the second person of color to be elected mayor of Long Beach, after Republican Eunice Sato, a Japanese-American who served as mayor from 1980 to 1982. A former member of the Long Beach City Council, Garcia was Vice Mayor from 2012 to 2014.

Garcia was born in Lima. He immigrated to the United States with his mother at age 5. His mother and aunt worked in many jobs, such as housekeepers, to support the family. In July 2020 Garcia lost both his mother, Gaby O'Donnell and stepfather, Greg O'Donnell to COVID-19.

In 2009, Garcia defeated six other candidates, including a former First District Councilmember, to win the seat vacated when Bonnie Lowenthal was elected to the California State Assembly in 2008. He was reelected in April 2010 by a margin of more than 40 percentage points.

In July 2012, he was unanimously elected to a two-year term as Vice Mayor by the City Council, becoming the first Latino Vice Mayor in Long Beach and the youngest in the City's history.

During his time as a council member, Garcia authored or cosponsored more than 20 pieces of legislation, including the City's first Equal Benefits Ordinance, a ban on smoking at bus stops and at farmers' markets, a proposal to extend increased preferences to veterans in civil service hiring, and a broad-ranging arts initiative that eliminated restrictions on street performances, and reduced the business license tax for artists and other home-based businesses. He also showed support for both the business community and labor unions, voting to support Project Labor Agreements at the Long Beach Airport, Port of Long Beach and for the Gerald Desmond Bridge, supporting the expansion of the Middle Harbor Terminal and working to improve infrastructure in commercial corridors. He has shown interest in government reform and fiscal accountability, and supported the City Manager's efforts to consolidate departments.

Garcia's support of the 2010 Long Beach Downtown Community Plan was criticized by some affordable housing advocates, who argued that the plan should be delayed to perform an economic study on affordable housing incentives. In response, Garcia argued that delaying the plan would be costly to the city, and that the economic study could be done separately. The plan passed the City Council, 7-2.

In 2011, Garcia spearheaded the effort to name a planned park in Long Beach's 1st District after murdered San Francisco Supervisor and LGBT civil rights icon, Harvey Milk. The park, since named Harvey Milk Promenade Park, was opened in 2013. Garcia has received national attention for his socially progressive views and the culturally diverse communities he represents, being young, Latino, and gay. Garcia was featured in CNN's 2009 special "Latino in America," and was named to the "40 under 40 list" by the national gay news magazine The Advocate.

In January 2013, Garcia was appointed to the California Coastal Commission.

In July 2013, after Bob Foster announced he would not seek re-election, Garcia announced his candidacy and entered the race for Long Beach Mayor. He received 25.4% of the vote in the April 8, 2014 election, finishing first in a field of 10 mayoral candidates. In the runoff election between Garcia and fellow candidate Damon Dunn (22.3% of the vote) on June 3, Garcia won with 52% of the vote and took office on July 15, 2014.

Garcia's first 100 days as Mayor were characterized by a focus on education and seating commissioners to fill vacancies on citizen commissions. Garcia committed the City of Long Beach to joining local educational institutions as a signatory to the Long Beach College Promise, and announced a goal of universal preschool enrollment and doubling the number of internships in the city for local students. He appointed more than 60 commissioners, creating the most diverse slate of commissioners in the city's history. A majority of his appointments were women. His State of the City address used a large digital screen to display data and graphics, winning acclaim for its visual appeal and use of technology. The speech highlighted education, economic development, and sustainability, among other issues.

Garcia's focus on economic development has been exemplified by his revival of the inactive Economic Development Commission, and acquisition of a $3 million innovation grant from Bloomberg Philanthropies During his first term, construction on a new civic center began, and voters approved a temporary sales tax to support infrastructure and public safety, which Garcia initiated. Garcia has focused on economic development, public safety and infrastructure, education, technology, and building housing.

Since his time as Mayor, Garcia has proposed 10 ballot initiatives for public safety, infrastructure, term limits, and creating ethics and redistricting commissions among other things; each have passed. This includes Measure BBB which created a finite number of terms which the Mayor can serve.

In December 2017, Garcia endorsed Gavin Newsom for Governor making him the first elected Latino to do so.

In May 2019, Garcia joined California Governor, Gavin Newsom, Representative Barbara Lee and others in becoming a California state co-chair for Kamala Harris's 2020 Presidential campaign. He was the only Mayor to join state leaders as a co-chair. In July 2020, after Harris bowed out of the Democratic primary and she and Garcia had endorsed Joe Biden, he went on to join the Latino Leadership Committee for the Biden campaign.

In July 2020 and inspired by the George Floyd protests, a petition to recall Mayor Garcia was approved by the Long Beach City Clerk. Activists cited Garcia’s "immoral leadership" and financial support from the Long Beach Police Officers Association, the union that represents local police. On November 9, 2020, the mayoral recall was canceled in the wake of the national election. Activist Franklin Sims claimed he and his supporters were being intimidated.