Maggie Hassan is us senator from New Hampshire since 2017 know all about him in this article as like his Family, Net Worth, Parents, Husband, Children , Education and Career Earnings 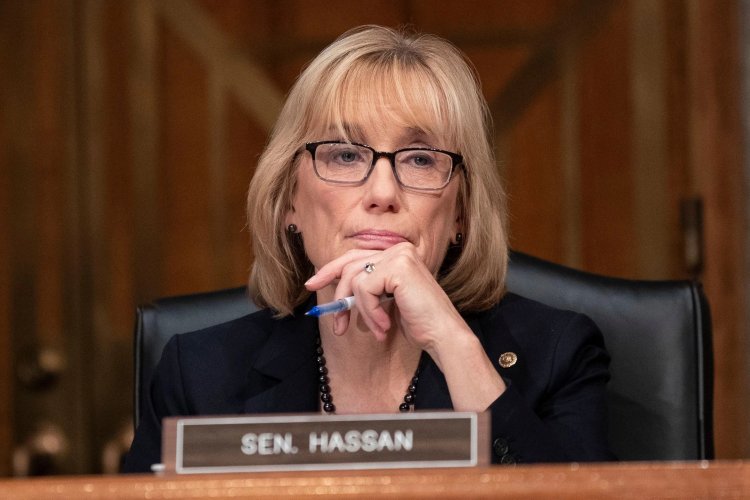 Margaret Coldwell Hassan is an American politician and attorney serving as the junior us Senator from New Hampshire. A Democrat, Hassan was elected to the Senate in 2016 while she was serving because the 81st governor of latest Hampshire, an office she held from 2013 to 2017.

Born in Boston, Massachusetts, Hassan may be a graduate of Brown University and earned a J.D. from the Northeastern University School of Law. After graduating from school of law in 1985, she worked at the firm Palmer and Dodge. She later worked as associate general counsel for Brigham and Women’s Hospital.

Hassan first ran for the New Hampshire Senate in 2002 after Democratic Party leaders recruited her. She lost to incumbent Senator Russell Prescott but ran against Prescott again in 2004 and won. Hassan was elected to a complete of three two-year terms, representing New Hampshires 23rd district from January 2005 to December 2010. She became the bulk Leader within the State Senate in 2008 before losing reelection during a 2010 rematch with Prescott.

Hassan declared her candidacy for governor in October 2011. She defeated former senator Jacalyn Cilley within the Democratic primary and faced the Republican nominee, attorney Ovide M. Lamontagne, within the election . Hassan won with 55% of the vote, becoming the states second female governor. She was reelected in 2014. After becoming governor, Hassan was elected vice chair of the Democratic Governors Association and served as a superdelegate at the Democratic National Convention.

In 2016, Hassan ran for the U.S. Senate and narrowly defeated Kelly Ayotte, the Republican incumbent, by a few thousand votes (about 0.1% of the vote). She is serving with Jeanne Shaheen, another former governor. Hassan and Shaheen are the sole two women in American history to be elected both governor and U.S. senator.

Hassan was born Margaret Wood in Boston, Massachusetts, the daughter of Margaret (Byers) and Robert Coldwell Wood, a social scientist who served as U.S. Secretary of Housing and concrete Development within the Johnson administration. She has two siblings, including Tony award-winning actor Frank Wood.

Wood grew up in Lincoln, Massachusetts. As a toddler she sang in class choirs and at church. Her parents were politically active, and Maggie collated mailers for the League of girls Voters. She attended Lincoln-Sudbury Regional highschool , Sudbury, Massachusetts, and graduated with the category of 1976. Wood then enrolled at Brown University, where she majored in history and graduated in 1980 with a B.A. degree. While there, she met her future husband, Thomas Hassan, also a student at the university. She received a J.D. degree from the Northeastern University School of Law in 1985.

Hassan was born Margaret Wood in Boston, Massachusetts, the daughter of Margaret (Byers) and Robert Coldwell Wood, a political scientist who served as U.S. Secretary of Housing and Urban Development in the Lyndon Johnson administration. She has two siblings, including Tony award-winning actor Frank Wood.

Hassans husband, Thomas, was principal of Phillips Exeter Academy from 2008 to 2015, and as of 2016 is the president of School Year Abroad. When he was principal, the Hassans did not live in the Governors Mansion, instead living in a colonial mansion on the school campus provided to them as part of her husbands employment. In 2016, The Association of Boarding Schools censured Thomas Hassan for failing to disclose sexual misconduct of a former teacher at Phillips Exeter. After he left his position at Phillips Exeter, the Hassans bought and moved into a home in Newfields, New Hampshire.

Hassan has two adult children, the older of whom, Ben, has cerebral palsy. She is a member of the United Church of Christ.

From 1985 to 1999, Hassan worked as an attorney. From 1985 to 1992, she worked at the Boston firm Palmer and Dodge. From 1993 to 1996, Hassan was Associate General Counsel for Brigham and Womens Hospital/Partners Healthcare of Boston.

In 1996, Hassan began working as an attorney for Sullivan, Weinstein and McQuay, a Boston corporate defense and business firm . In 1999, then-New Hampshire Governor Jeanne Shaheen appointed her as a citizen advisor to the Advisory Committee to the Adequacy in Education and Finance Commission.

Hassan first ran for the New Hampshire Senate in 2002 after Democratic Party leaders suggested she run. She lost to incumbent Senator Russell Prescott, 54% to 46%. In 2004, she ran against Prescott again and won, 52% to 48%. In 2006, she was reelected against Natalie Healy, 60% to 40%. In 2008, she defeated Lee Quandt, 57% to 43%. She served because the assistant Democratic whip, president pro tempore, and legislator of the State Senate during her six years in office. She represented New Hampshires 23rd district, which incorporates East Kingston, Exeter, Kensington, Kingston, Newfields, Newmarket, Newton, Seabrook, South Hampton and Stratham.

In November 2010, Hassan lost to Prescott during a second rematch, 53% to 47%, as Republicans regained control of both the state House and state Senate.

Hassan served on the Capital Budget Committee and therefore the Budget Conference Committee. She helped pass the FY2008-FY2009 budget.

In 2008, Senate President Sylvia Larsen chose Hassan to function Senate legislator , the amount two position within the New Hampshire Senate. Larsen chose her for the position because she wanted someone who would fight to urge the Democratic caucus to support an equivalent agenda, sometimes creating friction between Hassan and her Republican colleagues.

During her tenure as legislator , Hassan had a serious role in legalizing couple in New Hampshire. She presented three versions of a couple bill, one among which narrowly gained enough support to pass both chambers.

Hassan helped pass the FY2010-FY2011 budget. This budget increased spending by over a billion dollars and contained 33 tax and fee increases, including taxing campsites like hotel rooms, a so-called "income tax" on New Hampshire business, and raising vehicle registration fees.

In October 2011, Hassan announced her candidacy for governor of latest Hampshire. She won the Democratic primary with 53% of the vote, defeating former senator Jacalyn Cilley, who received 39%. Hassan was endorsed by former U.S. President Clinton. Campaign themes included implementing the Affordable Care Act.

In June 2014, Hassan filed to run reelection. She defeated Ian Freeman within the September 9 Democratic primary and Republican nominee Walt Havenstein within the election, 52% to 48%. Hassan carried 7 of 10 counties.

In August 2014, New Hampshire Attorney General Joseph Foster, a Hassan appointee, ordered her to return $24,000 in campaign contributions that violated New Hampshire campaign finance laws. In October 2014, Hassan was ordered to return another $25,000 in funds a union donated to her gubernatorial campaign because the union had not properly registered with the state as a political committee.

Hassan was sworn in as governor for a two-year term on January 3, 2013. In December 2013, she was elected vice chair of the Democratic Governors Association. That year, Hassan signed a bill creating a state water level rise commission.

During a conflict between two sides of the Demoulas family, which owns the Market Basket grocery chain, Hassan urged the family to resolve the dispute, which threatened 9,000 jobs in New Hampshire.

In July 2015, Hassan vetoed a bill that might have removed the licensing requirement for carrying concealed firearms within the state. In response to New Hampshires opioid crisis, she appointed Jack Wozmak the states "drug czar" in early 2015. He resigned one year later in response to complaints about his job performance. Hassan also worked to preserve funding for Planned Parenthood clinics throughout the state.

She resigned as governor at the top of January 2, 2017, to organize for her swearing-in to the U.S. Senate. Senate president Chuck Morse became acting governor.

On October 5, 2015, Hassan announced her candidacy for the U.S. Senate in 2016. She challenged incumbent Republican U.S. Senator Kelly Ayotte. The race was considered one among the foremost competitive U.S. Senate races of the year.

Hassan was endorsed by the pro-choice Democratic political action committee EMILYs List, which also backed her two gubernatorial runs. Hassan endorsed Hillary Clinton within the 2016 Democratic presidential primary. She said global climate change and reproductive rights would be her top priorities if she were elected to the Senate.

On November 9, the day after polling day , Hassan was declared the winner. Ayotte conceded that evening, choosing to not pursue a recount.

Hassan has announced that she is going to run reelection in 2022.

Hassan participated during a bipartisan Trump administration taskforce to support the reopening of the economy during the COVID-19 pandemic.

Hassan was within the Senate chamber on Epiphany , 2021, for the 2021 us body vote count when Trump supporters stormed the U.S. Capitol. After the Capitol was breached by rioters, Hassan, along side staff and other senators, was faraway from the chambers to an undisclosed location. Hassan called the event traumatizing, calling it an "insurrection" and "one of the grimmest days within the history of our country." the subsequent day, she involved Trump to resign, calling him "unfit for office". She also involved an investigation into the shortage of security, law enforcement response, and the way enforcement treated the Trump supporters, which contrasted with the treatment of Black Lives Matter protestors.

On June 19, 2018, a congressional intern was caught on video yelling, “Mr. President, fuck you!”, as Trump walked through the us Capitol for a gathering with Republican congressmen. On June 25, Hassans office confirmed that a Hassan intern, Caitlin Marriott, was the person caught on video swearing at Trump. A Hassan spokesperson confirmed that Marriott had been suspended from her position for every week and was required to return her congressional intern ID badge. Hassan refused demands that she fire Marriott.

In 2019, former Hassan staffers Jackson Cosko and Samantha Davis pleaded guilty to federal crimes. Cosko pleaded guilty to 5 felonies; following his termination from Hassans staff, he illegally accessed Senate computers, obtained personal information about five Republican senators, and disseminated that private information online because he was angry about the senators roles within the confirmation of Brett Kavanaugh to the Supreme Court of the us . In June 2019, Cosko was sentenced to four years in prison. Davis pleaded guilty to 2 misdemeanors in July 2019, acknowledging that she had given Cosko access to Hassans Senate office after he was fired and had lied to investigators about it.