Phil Scott is us Governor of Vermont since 2017 know all about Phil Scott Net Worth, Family, wife, Education, Children, Age, Biography, Political Career. 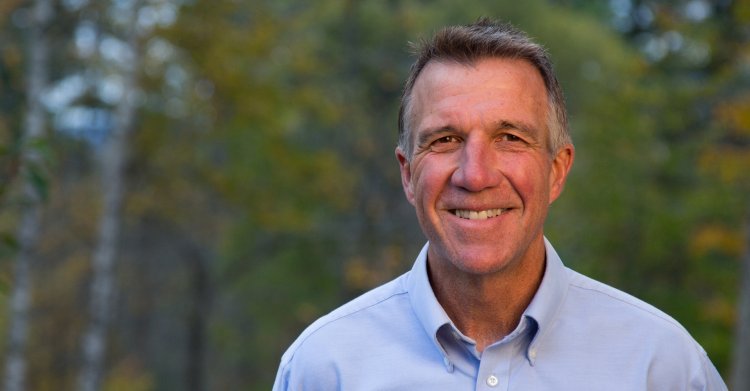 Philip Brian Scott is an American politician serving as the 82nd Governor of Vermont since 2017. A member of the Republican Party, he was elected governor in the 2016 general election with 53% of the vote. In 2018, he won re-election to a second term by a wider margin. Scott was elected to a third term in 2020 with a 41% victory margin, the largest in the states gubernatorial election since 1996, and the largest for a Republican since 1950. He was previously the 80th Lieutenant Governor of Vermont, an office he held from 2011 to 2017. Before serving as Lieutenant Governor, he was a State Senator representing the Washington County district from 2001 to 2011. As of 2021, he is the only member of the Republican Party to hold statewide office in Vermont.

Scott was born on August 4, 1958, in Barre, Vermont, the son of Marian (Beckley) and Howard Scott.

Scott lives in Berlin, Vermont, with his wife, Diana McTeague Scott and their two dogs. He has two daughters, Erica and Rachael.

After graduating from high school, Scott began working at DuBois Construction, a Middlesex business which was founded by his uncle. Scott became a co-owner in 1986. Scott is a past President of the Associated General Contractors of Vermont. On January 6, 2012, a fire at DuBois Construction caused substantial damage, but the owners were able to rebuild and continue operations.

After being elected as governor, Scott sold his share of the company to avoid possible conflicts of interest, since DuBois Construction does business with the State of Vermont. He sold his 50% share for $2.5 million plus three percent interest, payable over 15 years. Scott indicated that he opted to finance the sale himself rather than having the company borrow the money to pay him in full in order to preserve the companys bonding capacity. Critics suggested that Scotts sale of his share in the company does not eliminate possible conflicts of interest, but Scott and the attorney who negotiated the sale on his behalf disagreed.

During his time in the Senate, Scott served on several special committees, including the Judicial Nominating Board, the Legislative Advisory Committee on the State House, the Joint Oversight Corrections Committee and the Legislative Council Committee.

On November 2, 2010, Scott was elected the 81st Lieutenant Governor of Vermont. he defeated Steve Howard and assumed office on January 6, 2011. He was reelected in 2012, defeating Cassandra Gekas, and elected for a third term in 2014, defeating Dean Corren.

As lieutenant governor, Scott presided over the Vermont Senate when it was in session. In addition, he served as a member of the committee on committees, the three-member panel which determines Senate committee assignments and appoints committee chairpersons and vice chairpersons. In the event of a tie vote in the Vermont Senate, Scott was tasked with casting a tie-breaking vote. Scott also served as acting governor when the governor was out of state.

As a state senator and as lieutenant governor, Scott was active with a number of community service projects. In 2005, he founded the Wheels for Warmth program, which buys used car tires and resells safe ones, with the profits going to heating fuel assistance programs in Vermont.

In September 2015, Scott maintained high name recognition and favorability among Vermont residents. A poll conducted by the Castleton University Polling Institute found that more than three-quarters of Vermonters knew who Scott was, and that among those who were able to identify him, 70% viewed him favorably. Despite being a Republican himself, the same poll found that 59% of self-identified Democrats held a favorable view of Scott, while only 15% held an unfavorable view of him.

Scott was an active member of the National Lieutenant Governors Association (NLGA), and served on the NLGA Executive Committee and the NLGA Finance Committee. As a member of the NLGA, Scott joined fellow Lieutenant Governors across the country in two bi-partisan letters opposing proposed cuts to the Army National Guard in both 2014 and 2015. Scott was a lead sponsor on a NLGA resolution to develop a long-term vision for surface transportation in the United States. Scott was also a co-sponsor on resolutions to recognize the importance of arts and culture in tourism to the U.S. economy, to support Science, Technology, Engineering, and Mathematics (STEM) education, to support designating a National Arts in Education Week, and to support a comprehensive system to end homelessness among U.S. veterans.

In September 2015, Scott announced his candidacy for Vermont Governor.

An early 2016 poll commissioned by Vermont Public Radio and conducted by the Castleton University Polling Institute indicated that among the two candidates for the Republican nomination for governor, Scott was preferred by 42% of respondents compared to 4% for candidate Bruce Lisman. A poll commissioned by Energy Independent Vermont in late June 2016 indicated that Scott had the support of 68% of Republicans, while Lisman had the support of 23% of Republicans.

On May 8, 2016, Scott received the endorsements of nearly all the Vermont Republican legislators. Scott did not support Donald Trump in his 2016 presidential campaign.

In 2002, he became a three-time champion, winning both the Thunder Road and Airborne Late Model Series track championships and the American Canadian Tour championship. (Airborne Park Speedway is a stock car track in the town of Plattsburgh, New York). He also competed in the 2005 British Stock Car Association (BriSCA) Formula One Championship of the World, but did not finish.

On July 6, 2017, Scott won the Thunder Road Late Model Series feature race; he started from the pole and the victory was his first since 2013. Scott participated in a limited number of Thunder Road events in 2019, and won the June 27, 2019 LMS feature race. As of July 2019, Scott has 31 career wins, which places him third all time in Thunder Roads LMS division.