Tim Walz is us governor of Minnesota since 2019 know all about Tim Walz Net Worth, Family, Wife, Education, Children, Age, Biography, Political Career. 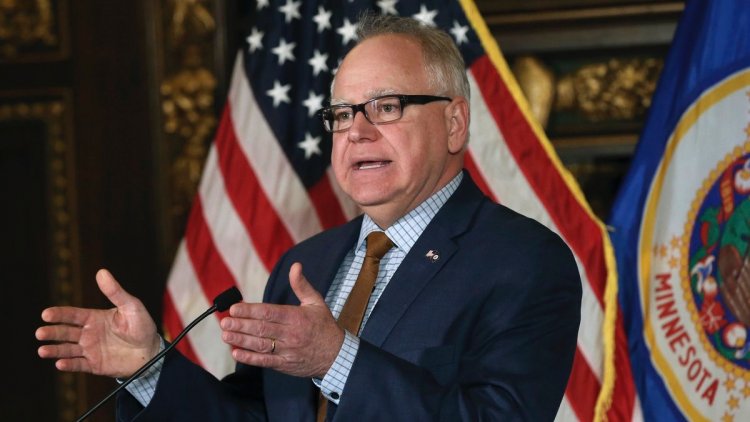 Timothy James Walz is an American politician, retired educator, and former military officer serving as the 41st governor of Minnesota since 2019. He is a member of the Democratic–Farmer–Labor Party (DFL).

Walz was the U.S. Representative for Minnesotas 1st congressional district from 2007 to 2019. The district comprises the states southern end, running along the entire border with Iowa; it includes Rochester, Austin, Winona and Mankato. He was first elected in 2006, defeating six-term Republican incumbent Gil Gutknecht. He was reelected five times and served on the Agriculture Committee, Armed Services Committee and Veterans Affairs Committee. Walz also served on the Congressional-Executive Commission on China.

In March 2017 Walz announced that he would not run for reelection to Congress and instead run for Governor of Minnesota. On November 6, 2018, Walz was elected governor, defeating Republican nominee, Hennepin County Commissioner Jeff Johnson.

Walz graduated from Butte High School in a class of 25 students, quarterbacking the football team. He was recruited by the University of Notre Dame, where he briefly played until he transferred. Walz passed for nine yards, completing five out of eight pass attempts.

After retiring from college football and leaving Notre Dame, Walz earned a bachelor of science degree in social science education from Chadron State College. His first teaching experience was at the Pine Ridge Indian Reservation in South Dakota. He then accepted a teaching position with WorldTeach in the Peoples Republic of China.

Walz enlisted in the Army National Guard in 1981 and served for 24 years. Over his military career, he had postings in Arkansas, Texas, the Arctic Circle, New Ulm, Minnesota, and elsewhere. He worked in heavy artillery. During his career, he worked in disaster response postings following floods and tornados and was deployed overseas on active duty for months, although he never saw combat. In 1989, he earned the title of Nebraska Citizen-Soldier of the Year. Walz attained the rank of command sergeant major near the end of his career, but retired as a master sergeant in 2005 for benefit purposes because he did not complete coursework at the U.S. Army Sergeants Major Academy. He resumed teaching as a geography teacher and football coach at Mankato West High School, Mankato, Minnesota.

Walz was born in West Point, Nebraska, the son of Darlene R. and James F. "Jim" Walz. The son of a public school administrator and community activist, Walz was raised in Chadron, Nebraska, a rural community in the northwestern portion of the state.

Walz and his wife Gwen married in 1994. They lived in Mankato, Minnesota, for nearly 20 years before moving to Saint Paul with their two children upon his election as governor.

Walz decided to run for Congress in 2006. He had no opponent for the DFL nomination in the September 12, 2006 primary election. He beat incumbent Republican Gil Gutknecht in the general election on November 7, and took office on January 3, 2007. After the election, Gutknecht was described as having been caught "off guard" and Walz as having "resolved never to get caught like that himself.... He packaged himself as a moderate from Day One, built an office centered on constituent service and carved out a niche as a tireless advocate for veterans."

Walz was sworn in as governor of Minnesota on January 7, 2019, at the Fitzgerald Theater in Saint Paul. Walz took the oath of office alongside incoming Lieutenant Governor Peggy Flanagan, Minnesota Secretary of State Steve Simon, Minnesota State Auditor Julie Blaha, and Minnesota Attorney General Keith Ellison, all Democrats. Walz spoke about education and healthcare reform in his inauguration speech.

On May 26, 2020, the day after the murder of George Floyd, Walz and lieutenant governor Peggy Flanagan demanded justice and called the video of Minneapolis police officer Derek Chauvin kneeling on George Floyds neck "disturbing". Walz elaborated, "The lack of humanity in this disturbing video is sickening. We will get answers and seek justice".

Walz responded to Floyds death by ordering the Minnesota state legislature to reconvene for a special sessions on legislation for police reform and accountability. After police reform failed to pass the first special session in June, a second special session was held in July. On July 21, the Minnesota state legislature passed major police reform legislation. The new compromise law includes a limited ban on police from using chokehold restraint so long as the officers were not at greater risk. It bans the old warrior training program, which was regarded as dehumanizing people and encouraging aggressive conduct.

It requires training peace officers to deal with people with autism or in a mental health crisis and deescalation training for situations that could turn volatile. And it creates a special independent unit at the Bureau of Criminal Apprehension for investigations of fatal police encounters and a community relations advisory council to consult with the Police Officers Standards and Training Board on policy changes. Walz signed the legislation into law on July 23.