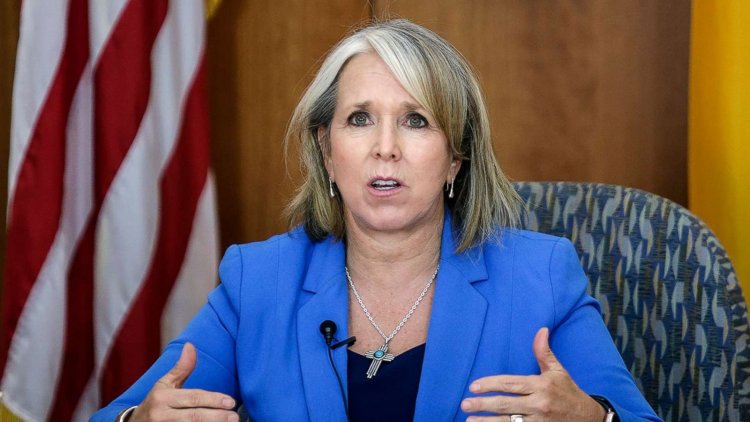 Michelle Lynn Lujan Grisham is an American lawyer and politician serving as the 32nd governor of New Mexico since 2019. A member of the Democratic Party, Lujan Grisham previously served as the U.S. Representative for New Mexicos 1st congressional district from 2013 to 2019.

Lujan Grisham served as Secretary of Health of New Mexico from 2004 to 2007 and as Bernalillo County Commissioner from 2010 to 2012. She was elected to the U.S. House of Representatives in 2012, defeating Janice Arnold-Jones. In 2016, Lujan Grisham was selected as the chair of the Congressional Hispanic Caucus. She won the Democratic nomination for governor of New Mexico in 2018 and defeated Republican Steve Pearce on November 6, 2018.

Michelle Lujan was born in Los Alamos, New Mexico and grew up in Santa Fe. Her father, Llewellyn "Buddy" Lujan, practiced dentistry into his 80s until he died in March 2011. Her mother, Sonja, was a homemaker. Michelles sister Kimberly was diagnosed with a brain tumor at the age of two and died at 21. Lujan Grisham says that her ancestors have inhabited New Mexico for 12 generations. She is part of the prominent Lujan political family in New Mexico, many of whose members have served in elected and appointed positions in government.

Lujan Grishams husband, Gregory, died of a brain aneurysm in 2004. The couple had two daughters.

Lujan Grisham served as director of the New Mexico Aging and Long-Term Services Department under Bruce King, Gary Johnson, and Bill Richardson. During Richardsons tenure, the position was elevated to the state cabinet level. In 2004, he named Lujan Grisham as New Mexico Secretary of Health and she served in the position until 2007. Lujan Grisham was later elected to the Bernalillo County Commission, serving from 2010 to 2012.

Lujan Grisham resigned as Secretary of Health in order to run for the United States House of Representatives in the 2008 elections, losing in the Democratic primary to Martin Heinrich, who won with 44% of the vote. New Mexico Secretary of State Rebecca Vigil-Giron ranked second with 25% and Michelle Lujan-Grisham ranked third with 24%.

Lujan Grisham sought the Democratic nomination for the House again in 2012 after Heinrich decided to run for the United States Senate. She won the nomination, defeating Marty Chavez and Eric Griego. She defeated Janice Arnold-Jones, a former member of the New Mexico House of Representatives, in the November general election, 59%–41%.

On December 13, 2016, one week after Tom Udall announced he would not run for governor of New Mexico, Lujan Grisham became the first person to announce her candidacy to succeed Susana Martinez, who was prohibited from running because of term limits. On June 5, 2018, she won the Democratic primary to become the partys nominee. On November 6, she was elected governor, defeating the Republican nominee, U.S. Representative Steve Pearce, with 56.9% of the vote.

Lujan Grisham was sworn in on January 1, 2019. In September 2019, she announced a plan to make public universities in New Mexico tuition-free to state residents.

On September 5, 2020, Lujan Grisham was named a co-chair of the Biden-Harris Transition Team, which is planning Joe Bidens presidential transition. In November, Lujan Grisham was named a candidate for United States Secretary of Health and Human Services in the Biden Administration. On December 3, 2020, she was elected chair of the Democratic Governors Association for 2021, having served as vice chair in 2020.